60 Miles by Road or Rail 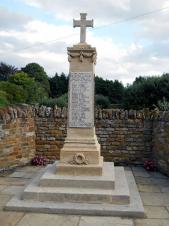 It lists those who died in the two World Wars.

History of the War Memorial

At the first meeting called to consider the question of a memorial, held on September 4th 1919, it was suggested that it should take the form of a village hall or institute, with a roll of Honour. At a meeting on February 5th 1920, a memorial cross was decided upon instead of the hall, owing to lack of support. On March 22nd 1920, Mr A.E. Smith of Elms Farm, Millway kindly promised to give piece of his orchard for the site. The memorial was funded by donations, concerts and a football match. The total cost of the Memorial Scheme, including incidental expenses, was £248 6s. The memorial, 11 feet high, designed and executed by Messrs. J G Pullen & Sons, was unveiled on Sunday February 6th 1921 at 3pm by Lt.Col John Brown, D.S.O. Deputy Lieutenant of Northamptonshire and was dedicated by the Rev W.D. Pearson, M.A (Vicar). The ceremony at the memorial was preceded by an impressive ceremony in the parish church.

At a meeting on November 9th 1921, the memorial was handed over as a public monument to the Parish and vested in the custody of the Parish Council.

Information taken from 'A History of Old Duston and Old St. James Northampton' by Fred Golby

RT @NPH_news: 📢Come and see our community bus today! We are in #Duston until 12:30pm.
Then we are heading off to #WestonFavell from 1pm till 2pm.